A downloadable game for Windows, macOS, and Linux

Grave Wave began as a remake of the 2013 "Generic Zombie Shooter", which was my first game. It's a top-down zombie shooter with a dark vaporwave theme.

The game began as Generic Zombie Shooter - Redux, but as the vision for the game has changed, and has quickly moved away from just being a remake, a name change felt necessary. The game is currently undergoing a visual overhaul, after which sound and music will be worked on before making the finishing touches to release on Steam!

All feedback and suggestions for improvement are appreciated!

Simply extract the ZIP file and run either the JAR file, or if that doesn't work, the BAT file. Requires Java 8 to play.

It’s a pretty decent timekiller and it plays smoothly. While it’s still a bit too generic right now, it has a good base for more content. I’m not sure if you aim to keep it generic, but I’d suggest more variation to skills, as well as a reason to use other weapons since every enemy just rushes you straight-on. While there are quite a few enemy variations, most of them die in 1-2 shots from the handgun.

Couple of other suggestion;

So as far as the title of your name goes, it’s a pretty generic but a nice solid demo

Hey, thanks for the feedback!

I definitely have a direction I'm taking it and I will probably change the title once it's no longer "generic". I'm planning to get rid of the "training" screen as it is right now and replace it with a perk / talent tree type system where you can upgrade effectiveness of specific weapons according to probably three different paths.

The Shotgun and Flamethrower seem to be the two most disappointing weapons from the feedback I've gotten so far. The shotgun is meant to do lower damage in favor of high knockback, but I'm currently doing a rewrite of the entire damage / health system for weapons and enemies to make it d20-based, so hopefully that can balance things out.

Grenade launcher is not the best weapon to take on bosses. In fact, the AK-47 is the best weapon pretty much overall in terms of overall ammo to damage output. I made a stupid change to the grenade launcher not long ago so the damage done to the enemy was according to their proximity to the center of the blast, but I didn't increase the overall damage of the explosion, so it ended up nerfing the hell out of it. Now that I'm redoing the damage system, I'm going to remove that.

The powerups have been a consistent problem. The thing is, I drastically reduced the drop rate of powerups in this release, and yet it still seems to be a problem. But I think the problem is because each enemy has their own drop rates for specific items, and every single enemy has a chance to drop SOMETHING, so at wave 32, there would be 165 zombies. The average drop rate of medkits is around 20%, so you can expect that roughly 33 enemies will drop a medkit.

I've gotten the suggestion multiple times to make the shop inaccessible during waves, and I think that's a good idea, but I would have to either add melee weapons or drastically increase ammo crate drop rates or you would end up out of ammo with no way to get more if I left things the way they are. 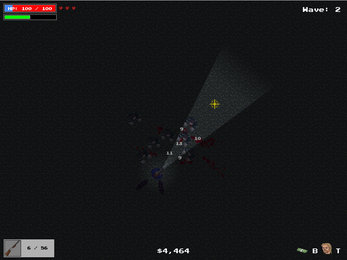 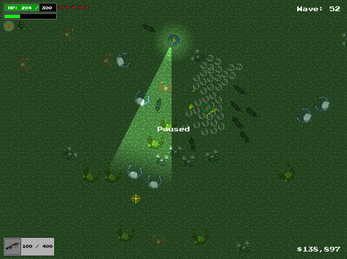 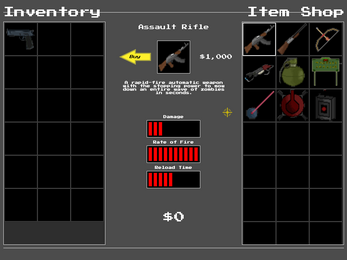